Purpose: So let’s say you are on this site as a logged in user and constantly use it for 3 hours a day. What would you want here?

The Water Beyond the Leap

A salmon in the river swam steadily upstream and regressed, then again, swam steady then regressed. The water resisted as he swam against it,but propelled him effortlessly as he regressed back downstream. He swam forward eight feet then retreated five. As he advanced, the water around him began to whir as all the other salmon swam head on towards the nearing waterfall. The rocks towered the water high and caused it to fall with such brute force. He watched the other salmon as they disappeared right above the blurry water fizz.

The Salmon had heard stories of the Water Beyond the Leap, so it was called, but he’d also heard stories of the Leap itself, and those stories were everything but encouraging. Claws and jaws awaited all salmon attempting the Leap, some made it to the Water Beyond, while some were never to be seen again. Some have seen the jaws, some have fought them; they all come back with scars. Those who saw the jaws recount the story over and over again until it is told that they themselves fought off the jaws and several claws; those who actually fought them swim with a certain pride and honor. Surviving the jaws earns you respect and the Salmon deeply desired respect. He would remind himself of this and rejoin the school, swimming head on towards the white fizzed curtain, but moments before the jump he would realize the risk and danger.

Turning back was getting harder and harder as he approached the Leap. The sheer volume of salmon was creating so much resistance that it was exhausting the Salmon just to retreat a few feet. The water wasn’t propelling him back as much as it had earlier. Together, the school of salmon were creating their own current. Nevertheless, the Salmon knew there was certainty in going back. As he swam, against the current of the school, he heard a buried voice. Why are you spending so much energy in regression, young Salmon? You’re only tiring yourself out. Put that energy into your leap.

In the mass of other fish, the Salmon could not locate the voice, h 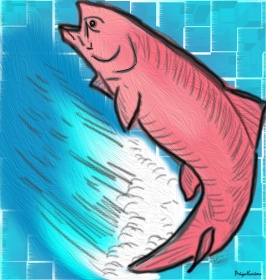 e wasn’t even sure if he had really heard it or if it was in his head. As the Salmon continued to struggle, he thought about what the voice had said. There are two currents: that of the water which will take him downstream to safety, and that of the school which will help him reach the water beyond.

Stories all come from somewhere, either from experience or exaggeration, but they have origin, that’s for sure. All the tales about the water beyond the leap must have at least some truth behind them, thought the Salmon. Discovery was up to him.

2 thoughts on “The Water Beyond the Leap”

-Recommended/related posts (Used as a strategy feature for allowing users to both discover new and more posts by different authors, and for keeping users on our site longer)